You are here: Home / Podcast Episodes / Stay in your investing seat – MPSOS118 [podcast] 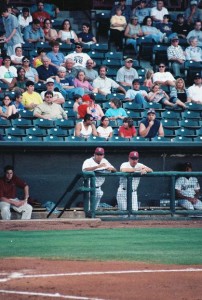 The Wall Street Journal released an article that shows the average 3 hour major league baseball game averages only 18 minutes of actual actions. That means there is absolutely nothing happening 90 percent of the time. Those 18 minutes contain all the real action and the real big plays often last less than 30 seconds. Because of the rarity of any substantial plays it is really important to be in your seat. The same applies to investing in the market: To get the best returns you should stay in your investing seat.

I was invited to a friend’s bachelor party. We met at Comiskey park for a White Sox game against the Braves. By the middle of the 3rd inning we were losing to the Braves 0-4. The game wasn’t very exciting and some of our group, including the groom-to-be, decided to head to the concessions. After all, we were way behind. What they didn’t know was that the White Sox were going to rally and Alex Rios hit a grand slam!

There were other noteworthy plays and the White Sox won the game 10-6, but the most exciting play lasted less than 45 seconds. The same can be said about investing in the market. 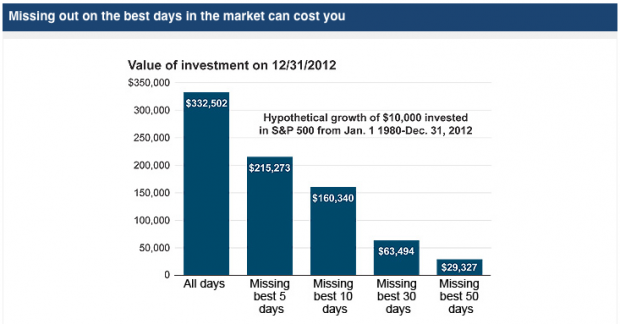 But investing is so boring!

Most of the time the stock market is boring. Contrary to what the media is preaching the market doesn’t do all that much from day-to-day. These uneventful days are just as important as each pitch past a player’s bat. Every strike counts towards the total box score and every once in a while there is a big play.

Do not leave your investing seat when the game seems hopeless. Do not vacate the market when there are still plays to be made. You never know when there will be a run batted in, a “27 up 27 down”, or a grand slam.